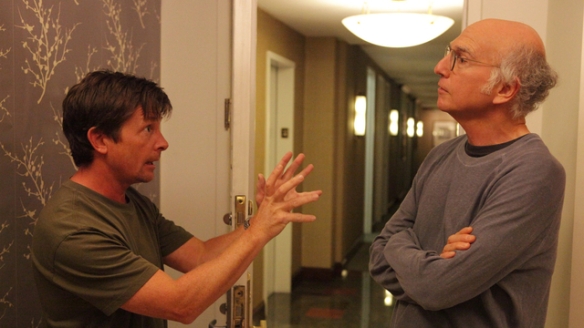 When a television comedy enters its eighth season you expect it to be ‘jumping the shark’ pretty soon, if it hasn’t already done so – in an effort to recharge a flagging show, its producers will desperately (or lazily) introduce a kooky relative, a mad dwarf, a man from space, or all three.

I initially thought Curb your Enthusiasm might have reached its ‘shark-jumping’ moment in Season Six, when Larry reluctantly takes in a family of black refugees. Then, in Season Seven, it was a Seinfeld cast reunion that smelled a little too much of ‘shark’. But both seasons had their share of solid stories and very funny situations.

Season Eight greets us with little novelty at all, apart from a mid-season switch to New York locales. And it might be one of the strongest seasons yet.

Larry and the Curb team have always been adept at juggling multiple storylines, then having them come crashing together in some outrageous conclusion. But I don’t think they’ve done it quite so cleverly and hilariously as they have in Season Eight.

For example, Episode Three manages to combine a golf tournament, a Palestinian chicken restaurant, Marty Funkhauser’s return to devout Judaism, an affair, a couple of annoying habits and Larry’s ‘social assassin’ skills to wonderful effect – along the way are many memorable Larry ‘moments’. (‘I’m going to fuck the Jew out of you,’ shrieks Larry’s Palestinian lover, while Marty Funkhauser fumes under his yarmulke in an adjoining room.)

Later in the season, we learn of Larry’s traumatic childhood Mister Softee memories, the results of which ruin a softball tournament and his sex life. The same episode includes some very funny scenes with a damaged car passenger seat (‘This chair is a fuck machine!’ declares Leon).

As usual, there are appearances of ‘real life’ celebrities. Larry battles Rosie O’Donnell for the affections of a bisexual lover, angers Ricky Gervais by talking throughout his stage performance, and in the season finale, Larry feuds with Michael J. Fox, claiming that Fox is taking advantage of his Parkinson’s illness to get back at him.

The only disappointment with Season Eight is the departure of Cheryl Hines, who played Larry’s extremely patient wife. With their divorce finalised in the first episode, she only appears in one short scene.

There is no one outstanding episode – like ‘Beloved Aunt’ in Season One, or ‘The Doll’ in Season Two – but that is possibly because they’re all pretty, pretty good. They’re so good it’s quite possible the show has a few more ‘sharkless’ seasons left in it.

Season Eight of Curb your Enthusiasm will be available to buy on DVD in Australia in June 2012.